My brief on this project was to completely revamp a kitchen/dining/living space.  My clients having decided to redecorate rather than relocate wanted a bright welcoming and cosy space.

Initially in order to bring more light into the kitchen area I dispensed with the single back door replacing it with a large pair or french doors opening out into the courtyard garden.This immediately flooded the interior space with the additional light required. 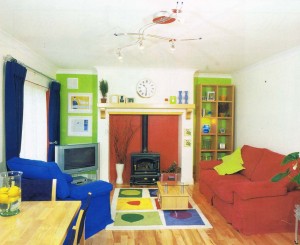 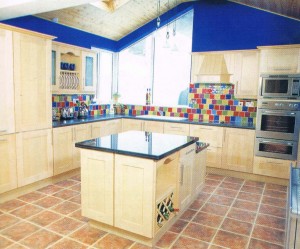 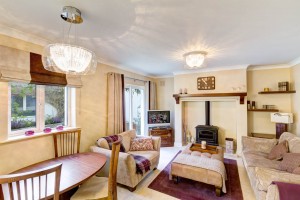 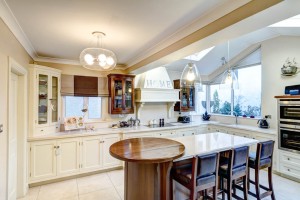 Having completely gutted the space the broken floor line of tiles and timber were replaced by large cream tiles running  the whole length of the room instantly opening up the entire area and giving the illusion of a much bigger interior space.

The bespoke kitchen took centre stage.  The central french style canopy was flanked by two bowed glass solid walnut display cabinets.  This immediately created an unfitted look and created a much more interesting feature rather than a line of upper wall units which in most cases are of no use.  The undercounter units around the hob were also bowed continuing the theme of introducing soft curves into what was previously a predominately angular interior space. These subtle curves were further enhanced by the quartz worktop with double profile detail.

To maintain the air of brightness the main body of the kitchen was constructed in cream. The inclusion of a large handcrafted solid walnut island was decided on to complement the bowed display walnut cabinets.  Again rather than an oblong island unit the addition of a circular raised walnut piece was added to break the hardness of the quartz and continue the subtle curved theme.

Moving on to the dining section an oval walnut table and chairs serve as a natural yet unobtrusive division between kitchen and living area. To further maintain continuity within the interior spaces I used similar style light fixtures.  Although similar in structure they each contained an individual design element within the glass globe creating a impressive feature without dominating the scheme.

The living area was toned down completely.  Gone are the garish colours which dominated the alcoves replaced by warm beige tones with the alcove on the right home to solid walnut floating shelves and bespoke bowed top low chest. The corresponding alcove contains a matching chest with drop down front to house sky box etc .The maple beam over the stove was replaced with a solid walnut polished beam connecting the two spaces visually.

Window treatments were also given the designer treatment.  Roman blinds when pulled can be uninspiring.  The introduction of a centre panel not only in a contrasting colour but also in a contrasting texture to the main fabric immediately introduced an element of interest.  This panel detail was continued in the curtains giving a hint of the accent aubergine colour without it dominating the interior space.

If you are planning to stay put rather than moving on you can now see how an existing interior space can be redesigned creating a completely new look!   You will almost believe you have moved!!!